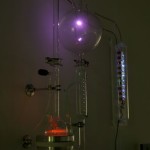 Origin of Life: Experiment #1 is an embodiment of liminal form and praxis. It is neither entirely art nor entirely science but a combination free from disciplinarity. The point in placing the re-creation of Miller’s experiment as an art installation is to engage the public in the ongoing dialogue between scientific experimentation and its social meanings. The attempt to recreate the evolution of primordial life forms has implications that transcend science itself.  Drawing the public into the process of experimentation forces each person to consider the meaning of origins for themselves, and asks them to question to what extent scientific knowledge can replace the origin myths it challenges.