A collaboration with Robert Root-Bernstein

“The aim of art is not to show how or why an effect is produced (that would be science) but literally to produce it.” – E. O. Wilson

The Origins of Life series is a working performative installation and re-enactment of the famous experiments carried out by Stanley Miller and Harold Urey at the University of Chicago in the 1950’s. 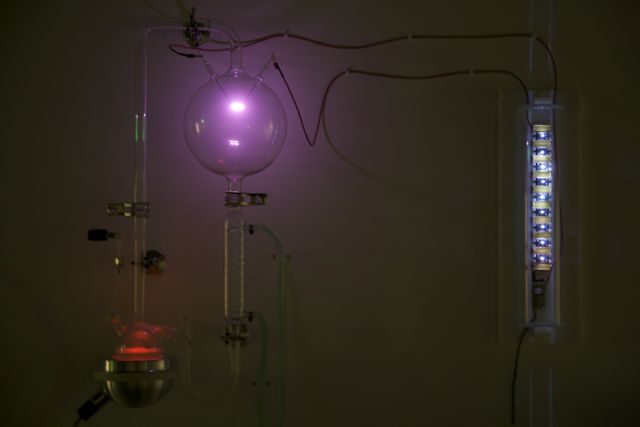 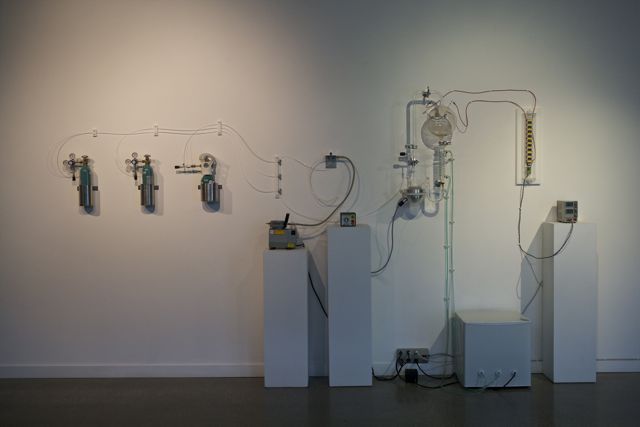 Every culture has myths about the origin of life. Science has had a profound impact on these myths in its attempt to replace them with a rational account of origins. Darwin undermined the Biblical account of Genesis by introducing the concept of evolution by natural selection at the same time Pasteur proved the impossibility of spontaneous generation. How then did life on Earth arise? Scientists such as Haldane and Oparin in the 1920s and ‘30s proposed that life evolved over great periods of time through a series of stages that produced first simple organic molecules, then more complex ones, then self-catalytic ones, and finally organized modules from which the first cells could emerge. Unfortunately, such hypotheses had a good deal in common with the myths they were intended to replace; myths, since there was no direct evidence for any of these steps.

Around 1950, the physicist Harold Urey proposed that it might be possible to test such scientific stories by recreating the atmosphere of the Earth and adding an energy source such as lightning to the mix. A graduate student by the name of Stanley Miller heard one of Urey’s talks on this subject and proposed to Urey that they carry out such a test. Urey was reluctant, but Miller convinced him that it would make a good Ph. D. thesis. Using the best knowledge about the Earth’s primordial atmosphere available at the time, Miller set up an experiment in which methane, hydrogen, ammonia and water were mixed in the presence of an intermittent electrical discharge. Within days, the experiment yielded the amino acid glycine, and within a week, alanine and urea as well. No previous experiment had yielded even one amino acid, let alone several, so Miller’s experiment represented a major breakthrough. He published his results in 1953 in the journal Science and it quickly became a scientific and public icon of origins of life experimentation.

Origins of life: Experiment #1 is a continuation of Miller’s 1953 experiment. This experiment has only been replicated exactly once before (by Hough and Rogers, in 1956), and it yielded the same compounds as Miller’s original. No one has ever run the experiment through multiple cycles of synthesis to see if, after several weeks or months, small peptides, sugars or other important compounds result. Moreover, the number of variations run on Miller’s experiment is very limited, despite the fact that the primordial atmosphere was almost certainly not the one that he replicated in his experiment. And now a great deal is known about the atmospheres of other planets and their moons. Thus, there are a huge number of permutations of Miller’s experiment that can fruitfully be run by making this into an “open source” experiment in which many people can contribute and participate.

Origins of Life: Experiment #1 is an embodiment of liminal form and praxis. It is neither entirely art nor entirely science but a combination free from disciplinarity. The point in placing the re-creation of Miller’s experiment as an art installation is to engage the public in the ongoing dialogue between scientific experimentation and its social meanings. The attempt to recreate the evolution of primordial life forms has implications that transcend science itself. Drawing the public into the process of experimentation forces each person to consider the meaning of origins for themselves, and asks them to question to what extent scientific knowledge can replace the origin myths it challenges.